Raleigh, N.C. — Shortly after the N.C. Wildlife Commission put jelly donuts and sardines on the ground near a tree outside UNC Rex Hospital, a black bear cub climbed down for the tasty treats.

The bear was seen running around near the tree at 12:25 a.m. on Wednesday. Then, Raleigh police said the bear had crossed the street, and police were trying to make sure it was safe. WRAL was the only news crew there when the bear came down.

Brad Howard with N.C. Wildlife said the cub probably showed up outside the hospital off Lake Boone Trail Monday night.

Officials say that the bear is around 18 months old and between 70 to 80 pounds. Raleigh Police Department has nicknamed the cub "Rex."

Greg Batts with the N.C. Wildlife Resources Commission said he bought the donuts from Krispy Kreme, which celebrated 84 years of business on Tuesday. Batts squeezed the raspberry jelly out of the donuts around the base of the tree and then put the donuts in a trail along with the sardines.

"I threw out all this food out in the base of this tree and he's laying up there in that tree and he's just smelling that," Batts said. "It's just coming up into his nostrils and some point you know you just gotta say 'I'm getting down out of here, I'm gonna grab some donuts and I'm gonna get out of town.'"

Batts said he was 3 for 3 in coercing bears out of trees.

Experts noticed the bear's fur was mangled and believe that it could have road rash. The Raleigh Police Department confirmed a bear was hit by a car a couple weeks ago, and biologists believe it was the same bear.

Now that the bear is out of the tree, the biggest threat is him getting hit again, according to District Wildlife biologist Colleen Olfenbuttel.

"Vehicles are the number one cause of mortality of urban bears," she said.

Howard said male cubs often accidentally end up in developed areas after their mothers set them free to find their own way. This cub probably traveled overnight and was confused when the sun came up and revealed he was in a populated area, Howard explained.

Officials say that it's common for people to spot cubs in May through July.

"They don't really understand ... they just follow creeks and rivers that lead into our cities," Howard said, adding the cub likely climbed into the tree for safety once daylight hit.

Doctors and nurses in the parking lot came outside on Tuesday to get a peek at the cub.

A section of the parking lot was blocked off and staff gathered near the tree taking photos of the cub. UNC Rex officials said that people in the area should be aware of the situation, and pay attention to any closed-off areas. 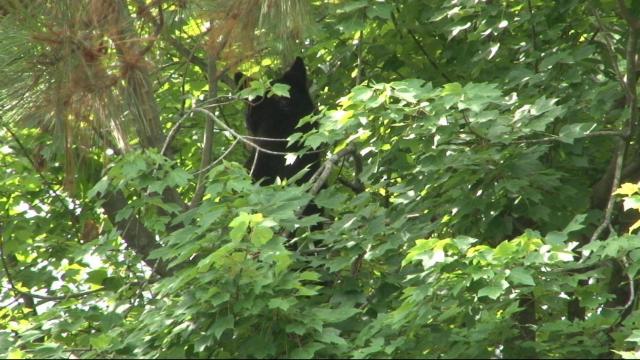 If you see a cub alone and are concerned, steer clear of it, take note of your location and call the N.C. Wildlife hotline at 866-318-2401. If it is a weekend or evening, contact your district's wildlife biologist. Never approach a bear or try to feed it.

While a bear in a tree is pretty common, Olfenbuttel said it's especially good news for black bears.

"It's an inconvenience, and we want to get the bear down as safely as possible but it's a wildlife success story that everybody should be proud of," she said.

In the 1970s, North Carolina went from almost losing all of its bears, to now having at least 20,000. While the state is slowly restoring bears in the coastal and mountain regions, that means sightings in more metropolitan areas will be common.

Raleigh also sits in an area where major lakes and rivers run through, which are major travel corridors for black bears.

"We are starting to see certain cities and towns where they do have an established bear populations," said Olfenbuttel. "We've seen bears adapt to the high human development disturbances and we're looking into how they are doing that and what does that mean for both bears and people."

Currently, there is no established black bear population in Raleigh. There aren't any plans for it either since the environment is not ideal for black bears.

"They are very vulnerable. In Asheville, there's mountains but still a lot of traffic," said Olfenbuttel. "We determined the Piedmont is not an ideal place [and] we are trying to limit establishment, but a bear will do what it wants to do."

Biologists also recommend making sure not to leave trash outdoors and cleaning grills since bears are smart and will take advantage of those situations. 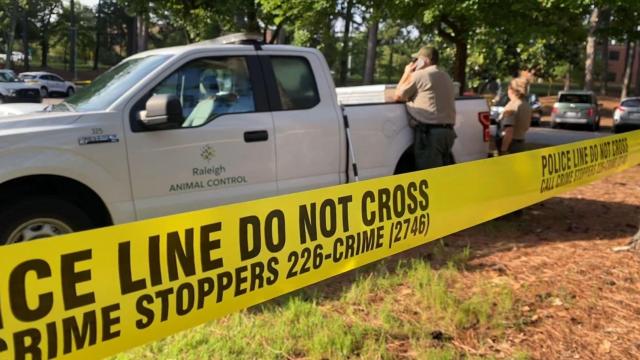